How do military MBA applicants compare on GPA?

This is part two of our series analyzing data across hundreds of military clients applying to top business schools for their MBAs. In our previous post we reviewed GMAT scores, and in this post we will discuss GPA.

One big obvious difference is that there is nothing you can do to change your GPA, as opposed to the GMAT which you can retake and improve on. So if your GPA is considered low, there is no use in worrying about it because it's in the past and outside of your control, and there is no point in worrying about things you cannot change (what good does it do?). If your GPA is of concern for you, just double down your efforts on the rest of your application, including the GMAT if you have time.

That said, knowing where your GPA falls with top business schools is still an important factor because it can give you some partial insight into your competitiveness.

Not all identical GPAs are in fact equal. Here are some things to keep in mind while looking at this GPA data:


The following is the average GPA of accepted military applicants at top MBA programs: 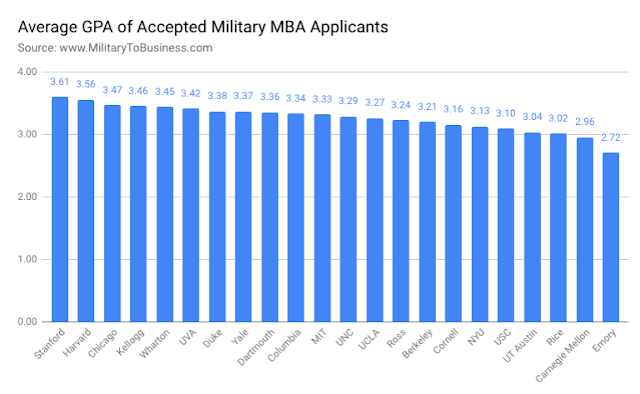 
What about a minimum GPA?

It's of course difficult to say what a minimum GPA is because it depends on many factors, including the rest of one's application. An applicant with a 780 GMAT will have a lower acceptable GPA than a student with a 680 GMAT. So if you're on the lower end of both GMAT and GPA, that is not a good sign and you should double down on your GMAT.

The following are minimum GPAs we have seen accepted at top schools. This is not an ehaustive list, it is only based on several hundred MtB clients: 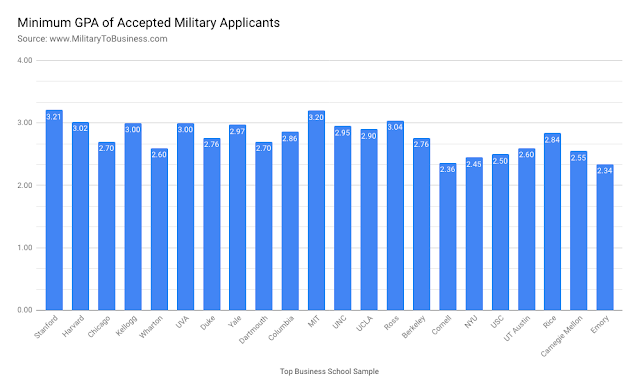 GPA is only but one factor. Here are the highest GPAs we've ever seen rejected from a sample of top schools: 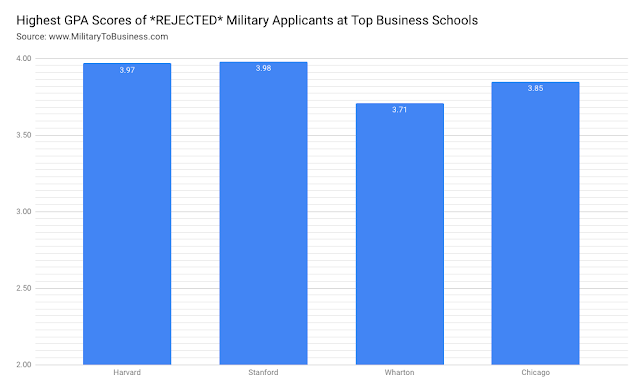 So having a 3.97 or a 3.98 is not an assurance you will get into Harvard or Stanford for example. Common reasons for being dinged is usually not a low GMAT score for those with such a high GPA, but rather poor decision making on how the applicant portrays themselves in the application, how they express their career goals, and potentially how they interview.

Ok, so how important is GPA for military applicants at top business school programs? 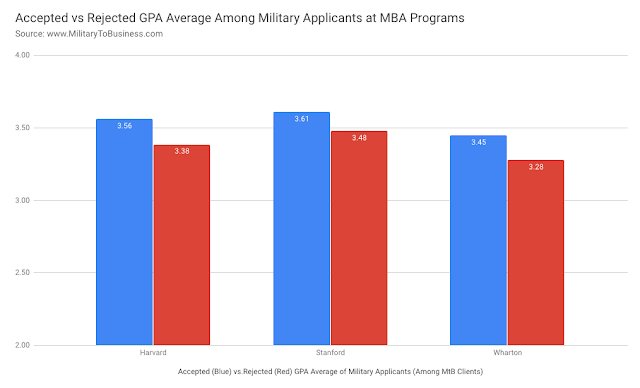 The average accepted applicant at Harvard, Stanford, and Wharton has a GPA of 0.18, 0.13, and 0.17 more than the average rejected applicant. This is not a huge difference but appears more significant than the mere 14 point gap on GMAT averages.

There is nothing you can do about your GPA at this point in your life, but there are things you can do to help mitigate it if necessary. Among these are a strong GMAT (especially quant score) and secondary transcripts showing strong performance in analytical courses such as statistics.

When it comes to military applicants, we see these general trends:

The above are of course only generalizations and one is always invited to become the outlier that moves the needle on our graphs, so we welcome you to always aim for the top school of your choice. And as always, best of luck!