How do military MBA applicants score on the GMAT?

In this post we will analyze the GMAT scores of accepted military applicants at top business schools. Keep in mind that this applies to the aggregated data of MilitaryToBusiness clients, which may or may not perfectly represent the broader military application pool. Nonetheless, this data is based on experience of working with hundreds of military applicants over many years.


If you are taking the GRE instead of the GMAT, make sure to use a  GRE to GMAT conversion to follow along.

The following is the average GMAT of  accepted military applicants at top business schools, sorted from highest to lowest: 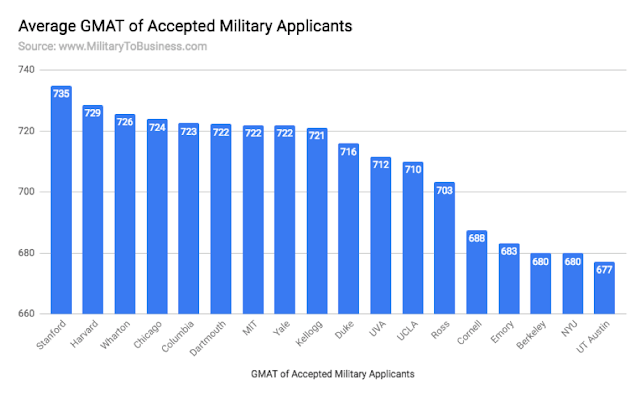 The above means that as a military applicant you should not expect to be evaluated to any different standard than other applicants, at least when it comes to the GMAT. We often hear GMAT excuses such as "I didn't have time to prep as much as I wanted to, will schools understand this?" or "I haven't done quant in a long time. Will I get a break because of my military background?" We now have an unequivocal answer: no. While there is a bell curve and applicants do get accepted on the lower end of that GMAT curve, there are no breaks on the GMAT. It is crucial for your success.
What about the quant and verbal GMAT breakdown?


Many people say that the overall GMAT is not as important as the pure quant score of the GMAT, and we at MilitaryToBusiness tend to agree with this. This makes sense considering there should be little doubt that a US military member is likely to have a sufficient baseline for verbal and reading skills regardless of his/her GMAT verbal score. However, a low GMAT quant score may mean that the same military member will not be able to pass the school's analytical courses or succeed in the types of roles commonly recruited for at business schools.
The quant score is actually the first thing we look for when assessing clients and potential clients at MilitaryToBusiness. So here are the averages for the same schools as they were sorted by overall GMAT average. For uniformity across different times when the test can be taken, we have converted everyone's score to percentiles: 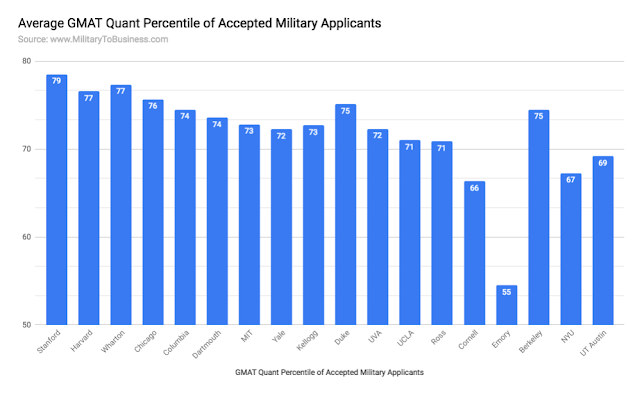 Takeaways:
A mediocre quant percentile score is in the 70s for top business schools, at least for successful military applicants. If you are below that average, it would be important for you to have a strong technical undergraduate degree with technical coursework such as calculus and engineering. If you have neither, you are at a disadvantage and should continue to work on the GMAT/GRE regardless of your overall score.
Let's not ignore the GMAT verbal section...
Successful military applicants score much higher on the verbal section than the quant section of the GMAT. This is not surprising since so much of military leadership is based on verbal and interpersonal communications, and so little on analytical exercises.
Here is our current data on the GMAT verbal section percentile of successful military applicants at top business schools: 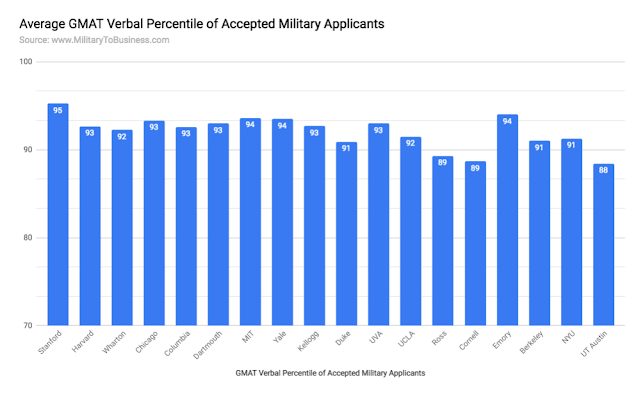 Takeaways:
While these scores are all relatively high and strong, I believe schools can be more forgiving if a verbal score is lower. This is especially true if English is not your first language. However, schools may be much less forgiving if you have lower quant score as you could simply be at risk for not completing their coursework and graduating.
What if I have a lower score? Am I doomed?


No, certainly not. By definition, half the people who are accepted have a score below the median! So it's ok if one is below average by a little bit. Hopefully you are making it up by being above average elsewhere, such as GPA (which will be a separate post).
Below is a graph of the lowest GMAT scores we have ever seen accepted at top business schools. Keep in mind that this is over a period of nearly a decade and covers hundreds of clients, so I would not suggest reading these numbers and thinking that these are benchmarks for you to strive for. Applicants with these scores face almost certain rejection (almost!). 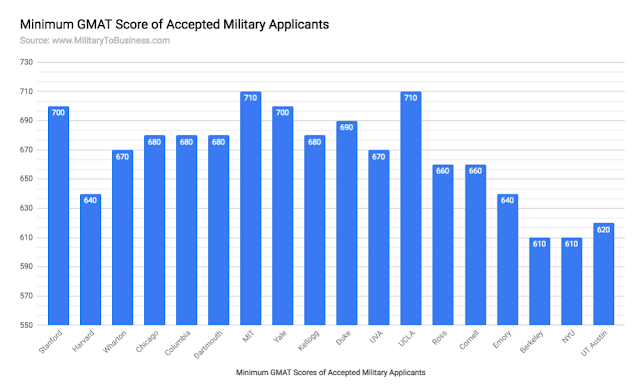 The first thing that jumps out is why are MIT, Yale, and UCLA so high? Remember that this data represents MilitaryToBusiness clients, which tend to skew toward certain schools. Most of our clients applying to MIT, Yale, and UCLA apply to them as alternative schools and often not as their top choice. So their minimum reflects those who likely applied to them along with higher ranked schools. As we continue to add clients and more data, we will update our stats.
Another element that jumps out is that in the 9+ year history of MilitaryToBusiness, we've never seen an applicant accepted to any program with a score below 610. I'm sure this has happened to others out there, we have just never seen it. Perhaps those applicants are less likely to use a consulting service because we also haven't seen many prospective clients with those scores. When we do, we usually insist that they retake the GMAT.
I also want to emphasize that one should not look at these numbers and say, "Oh, I've got a 640 so I must have a shot at Harvard." One person in nearly a decade got into HBS with a score of 640, and that person likely has a different demographic, background, GPA, and history from you. The above is just shared for those eternal optimists who like to think "so you're saying there's a chance..."
Outlier data aside, the general rule of thumbs seems to be the mid to high 600s as a minimum score for military applicants to be considered at top 15 program  Keep in mind minimal scores likely need exceptionally high GPAs and/or a particularly unique and compelling demographic and background narratives which make you more competitive to others with higher GMATs.
So if I score high on the GMAT, does that mean I'm going to get in?
Short answer... definitely not. A GMAT is important but it's not enough to get you in to any program, even if you score a 800. A high GMAT score correlates well with admission though since often people with high GPAs will also have high GMAT scores, and people who put in the time for a high GMAT score will also put in the time on their essays and overall application.
A high GMAT score by itself is not a golden ticket. You have to also ace the essays, recommendations, and the interview. Below is a chart of the highest scores we have ever seen rejected at top 5 programs. 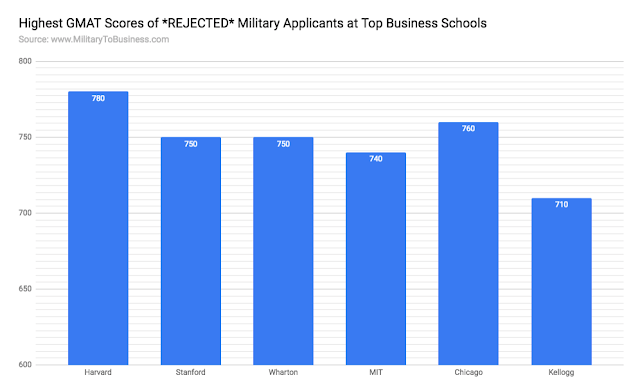 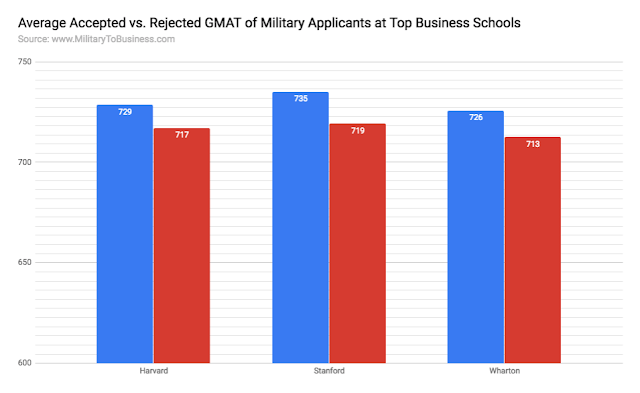 What we see from these results is that the difference between the average accepted and the average rejected GMAT is not all that much. On average, just 14 points! This again reveals that a good GMAT score is essential but is definitely not sufficient.

The GMAT is a crucial piece of your business school application, and the quant section in particular is key. It is to your advantage to max out your GMAT (or GRE) score when applying to ensure you rise to your highest potential. People often do not peak on their score until they hit 200, 300, or sometimes 400 hours of prep work. You can do the quick math on this; for example, 15-20 hours a week for 20 weeks.

The GMAT may not be an effective test of intelligence but it can at least be an effective test to see who has the commitment and will power to succeed at the test, which can be an incredible signal just by itself. And that's a lot of what business schools really are... signals. One can learn almost all the same business fundamentals at (random school X) as they can at Harvard, or even just by self-studying. However, Harvard sends a stronger market signal to employers because it means you have put in a career of performance and diligence into your work, which may be more important than the raw knowledge you possess.

So don't look at the GMAT only as a reflection of underlying skill sets but rather as a reflection of your commitment and work ethic. Put in the time and make sure you get the best possible score you can. It could change the trajectory of your entire career.
Lastly, remember that a strong GMAT score is never by itself sufficient. To get into a top program, you will always need compelling essays, resume, recommendations, and a persuasive interview. The process is so competitive that one has to ace every part of the application process.
If you would like to get a  free assessment of your own competitiveness, feel free to reach out to us at MilitaryToBusiness.
Good luck!